First and foremost, I forgot to post this!  Almost a month ago, while fellow blogger Jill from Just Peachy was on a Hawaiian vacation, I did a guest post for her!  Click here for my review of Milani Garnet Gems!

I also wanted to give you guys an update on my peeling nails situation.

Instead of jumping right back to Sally Hansen Miracle Cure (which has an absurd name that I honestly just equate with snake oil), I opted instead to give Nail Tek Xtra a try. 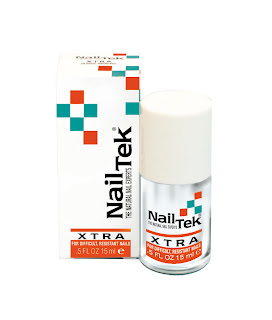 The bottle says that it's for difficult, resistant nails.  The box even says that this should be used on nails that other products don't seem to help.  That sounds like mine!  So I'm giving it a shot.  While we were snowed in last week, I took the time to give myself a very nice manicure.  I used cuticle remover, pushed back my cuticles, and also took the time to buff the surface of my nails.  I don't usually do this, but this seemed to help.  I don't have outstanding ridges, but the buffing and shining really helped reduce the severity of the peeling that was going on.

I've been wearing the Nail Tek base coat since.  I know that it will take a while to notice progress, but I'm already seeing a definite turn around in the nosedive my nails were taking.  I'm looking forward to seeing just how well this Nail Tek Xtra holds up.

Erin
Indiana, United States
Thanks for visiting my blog! I hope that you enjoy your stay! :)